It’s a real “Tokyo brewery,” about 40 minutes by train from Shinjuku. We―a group of people of different sex in different occupation, ranging from a young woman in her twenties to a suave man in his forties—made a small trip to Toshimaya Shuzo in Higashi-murayama City of Tokyo. 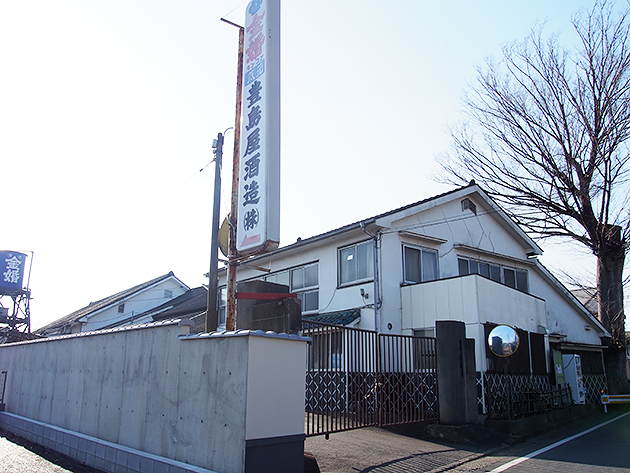 We were welcomed by Mr. Takaharu Tanaka, the forth-generation owner of the brewery and Mr. Kazuhiro Kawakami, a sales representative. After exchanging greetings and receiving instructions, we bundled ourselves up, preparing for entering the freezing cold kura where sake was being made. 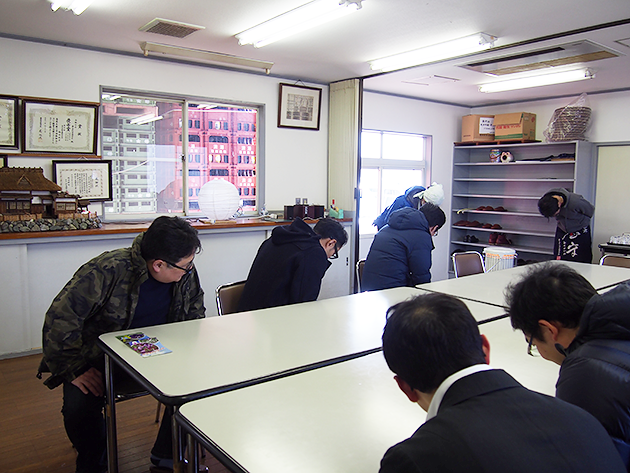 But first, we went to see “sugitama.” 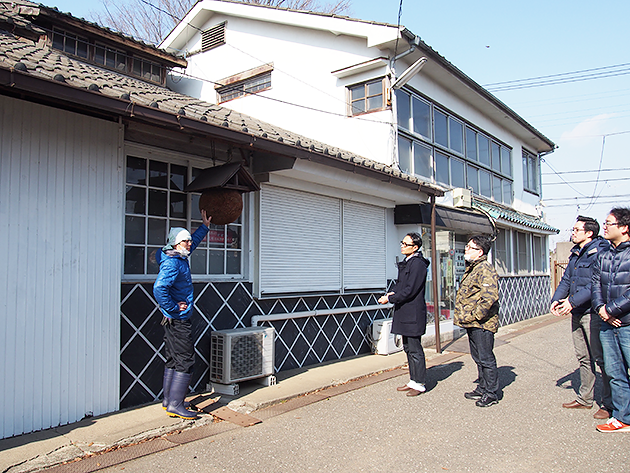 Sugitama is a round ball made with cider leaves stuck in a ball-shaped frame and cut to make a round surface. Since long ago, breweries have hung sugitama at the entrance after pressing the first sake of the year, telling the neighbors that they have brewed new sake. In the past, people would learn whether the sake had been aged enough to drink, by seeing the color of sugitama, which was fresh green at first and then turned brown around the time the sake was ready to drink. Back then, it wasn’t common to drink freshly pressed sake.

Among other processes, koji making is the most important part. Only limited people in the brewery are allowed to enter the koji-making room, and they need to get sanitized and naked down to the waist when entering the room. Should unnecessary mold get in the room (though of course it could not happen), they need to wash up everything in the room, from the floor and utensils to the ceiling. As it is said among them, sake brewing is firstly about koji; secondly, moto; and thirdly, moromi.

Naturally, we were not allowed to enter the koji room, but Mr. Tanaka assured that we could see all the other rooms. Everybody in the group got excited, though it couldn’t be said that everyone was at the same level of understanding: “I don’t know the details of sake brewing yet, but I feel lucky!” “Wow, I cannot believe I can see moto!” “Does that mean we can smell the aroma of moromi?” 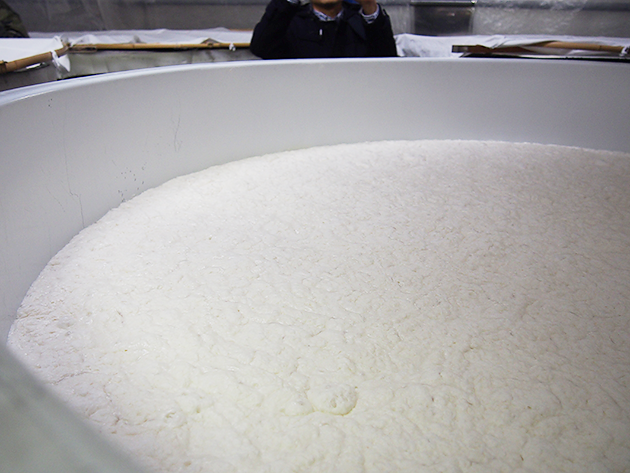 The white stuff pictured in the above is “moto,” which is also known as “shubo.” The process to propagate in a small tank only an strong strain of yeast to make sake is called “moto-date,” or moto-making, while the yeast mash itself is called moto. As we stood beside it, we could hear small popping sounds, a proof that the yeast was alive. “Cute, isn’t it? It’s really adorable,” said Mr. Tanaka, and everybody smiled, quietly listening to the sounds. 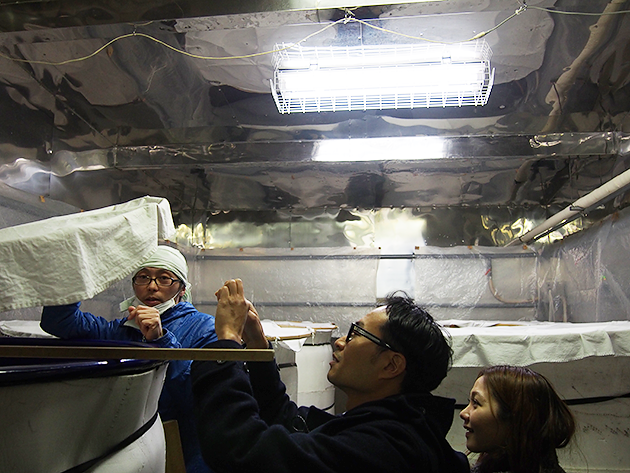 All the eight tanks had a different look, probably because of the difference in the time of making, rice, or type of yeast strains. Or, maybe those eight tanks never show the same look even if conditions were the same; yeast is, after all, a living thing. 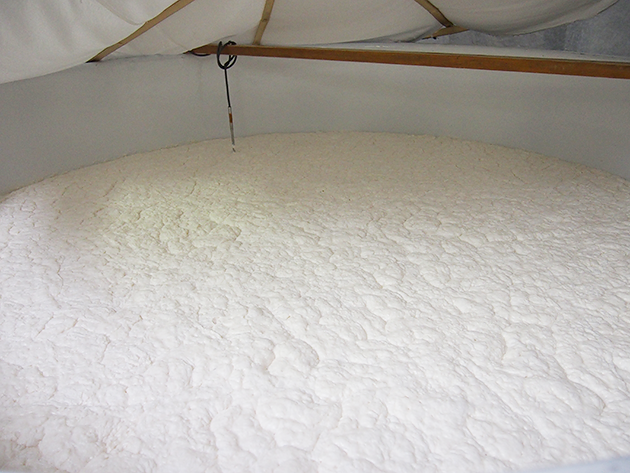 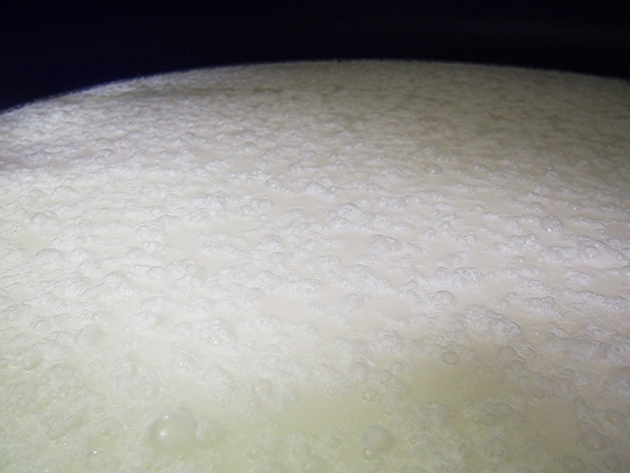 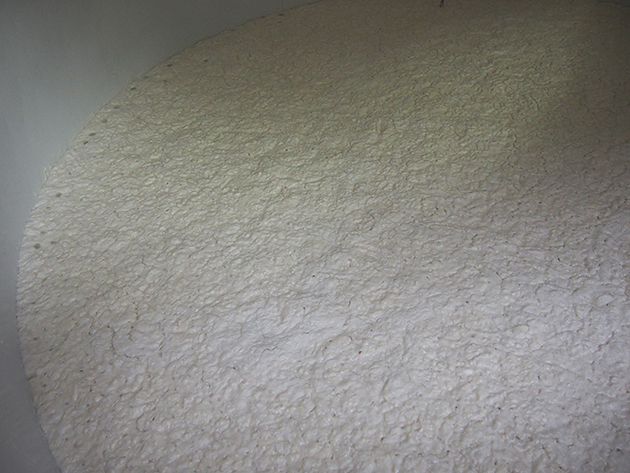 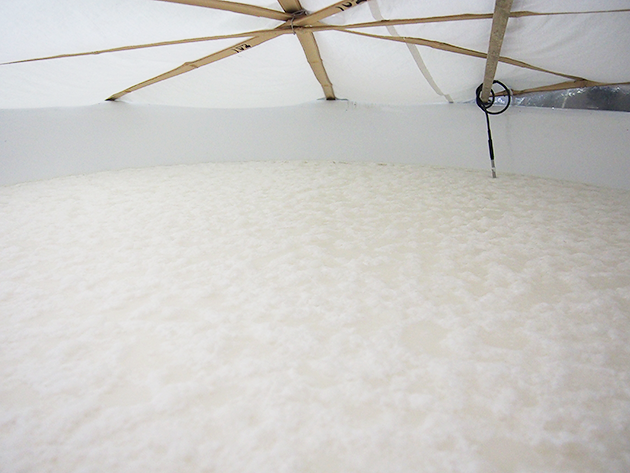 We then climbed a ladder to where moromi was fermenting. We were all daunted to hear that we would die if we fall in one of those tanks. Looking into the tanks where moromi was fermenting, we could see it bubbling, much livelier with bigger bubbles than the moto we had seen earlier. Here the tanks were monitored individually, with their conditions recorded every day, just like we had seen in the moto room. The moromi was developed with much care and love. 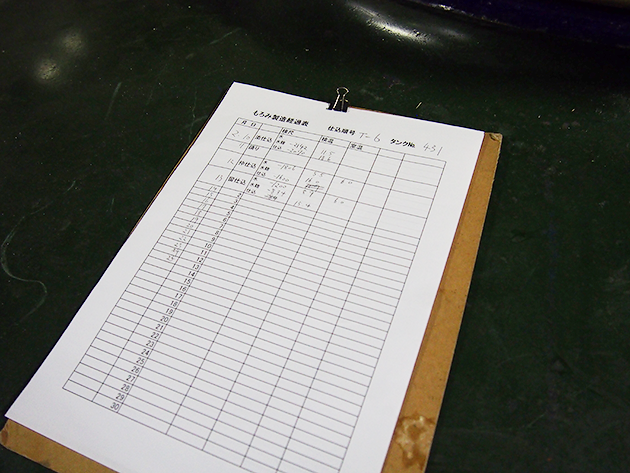 When I was thinking about moromi, looking into the tank, Mr. Tanaka told us to look up. I did as I was told, and there were old wooden beams and vast space stretching in front of me. Mr. Tanaka told us that the building had been built by the truss construction method and thus did not have posts, as a result of which we could have a clear view of the whole room. The beams, which had been placed based on a thorough calculation, were beautiful, still sitting quietly 100 years after the construction, even after the great earthquake in 2011. 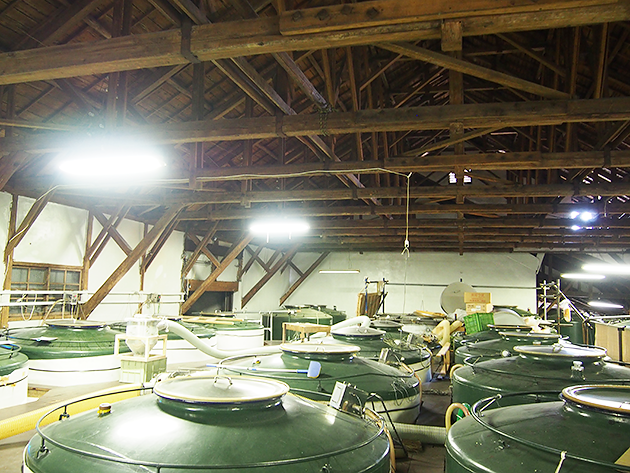 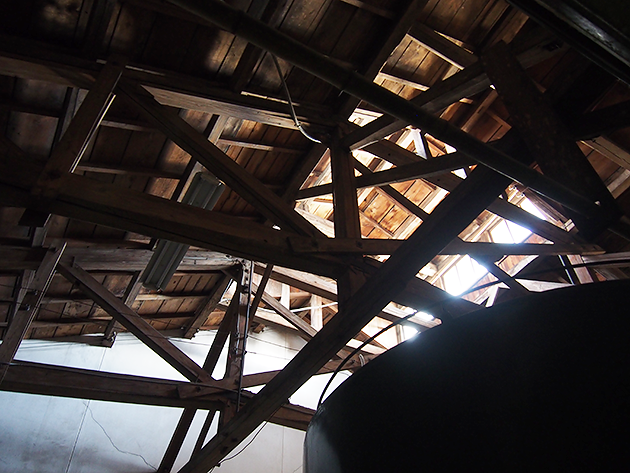 Toshimaya’s origin dates back to 1596, when the founder Juemon started running izakaya in Kanda. With his talent, he expanded the business into various fields, one of which was sake-brewing in Nada with two other companies. Later, the operation was relocated to the Fuchu area, followed by the further relocation to the current place, where it took over the business of Kawashima Shuzo, which was to be closed down. “庭の松 (Niwa-no-Matsu)”, the name of one of the brands of Toshimaya is probably from the time of Kawashima Shuzo. There is so much history in this brewery. 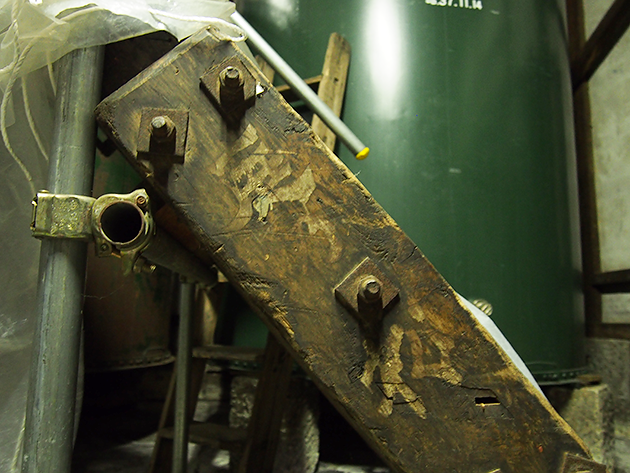 Next time, I’ll tell you how the tasting—which everyone had longed for—went. (It was actually more like a drinking party than tasting.) Do not miss out! You’ll also get some information about the next event I’m planning now.